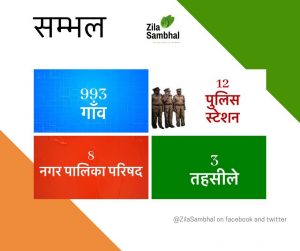 Zila Sambhal is a district of Uttar Pradesh State In India.The District headquarter is Bahjoi town.

There are three Tehsil namely Chandausi, Gunnaur and Sambhal. There are total 993 villages, 12 Police Stations and 8 Municipal Corporations under Sambhal district. Population of district is over 22 lacs which lives in the area of 2453 Square Kilometer.

Sambhal has been an urban center for hundreds of years. It was a prominent town during the medieval period.

The district was announced on 28 September 2011 by the state government. At the time of its creation, the state government decided to name the new district “Bhimnagar”. However, massive protests broke out in Sambhal town and the adjoining rural areas against the move to give a new name to the ancient town. Sambhal had been known by the same name for over five hundred years.